There and Back Again: RPGing Life

On 29 July 2015 I flew away for what felt like a year and day, even though it was for only 3 weeks. I flew away from St Louis to Los Angeles and on to Honolulu, and each bit of this trip seemed a bit more surreal than the previous (and that says a lot, given that it felt like make believe from the very moment I left my house.)

The day I left was one of those days when Twitter reflects some dystopian fiction made way too real. Looking at my Twitter feed, I saw folks struggling in St Louis, trying to figure out how to keep summer food programs going in the face of threats of violence. Looking at my Twitter feed, I saw Trump rising in popularity in a political field filled with prejudice. Looking at my Twitter feed, I saw trolls dancing merrily on the Hugos, and Illinois continuing to falter, and NASA friends continuing to flee to non-science jobs, … I saw a lot, and I realized I needed to stop seeing it. In curating a diverse, nerdy, and somewhat overly intellectual Twitter feed, I had created something that forces me to confront our world in all it’s brokenness, and it turned out I just didn’t have it in me to react intelligently (in 140 characters) to everything I was seeing. Some inner voice wisely went “Nope.” So I stopped reading. I just stopped, and in a moment of wild-assed whimsy, I gave over my Twitter feed to my often sarcastic inner monologue, and I just started tweeting my trip like it was one of the text-based RPGs I played as a little kid.

And people liked it.

So, I didn’t stop. I just kept treating my insane life like the insane game it too often feels like, and I tweeted like life was an RPG for all three weeks of my travel. [Storify’d version here – The number of typos/autocorrect fails is more than a bit embarrassing!]

And I think it’s what I needed to do.

I don’t know if I can explain this, but I’m going to try.

I can’t remember not having a computer. I remember having to use a tape drive to find software on a tape when I was 3 or 4, and the importance of rewinding the tape all the way, zeroing the counter, and very carefully fast-forwarding to the exact number that was handwritten on paper beside the drive. I remember early 8-bit games that would keep my parents up late at night, and I remember getting sore thumbs flying my X-Wing through a line art rendition the Death Star back in the days when we just had paddles and joysticks weren’t a thing yet. At some point, I was able to actually get the family’s old Apple IIe moved up into my bedroom, and with it came all sorts of software on floppy disks. I was never really into video games (although I certainly lost my share of afternoons to Pitfall and other Atari 800 games). What really sucked me in were the text-based games. I have no clue where they came from. In my mind’s eye, I can see hand-written labels that say, “Emond Games” (sp??). Some were adventures through castles or dungeons. At least one was Star Wars based. I suspect they came from one of the game exchanges my dad sometimes went to at the local computer store. Wherever they came from, I would spend hours drawing out my graph-paper maps as I explored these made up worlds in search of … well, whatever the game of the day felt I should be in search of. In 1985, I got my first “expensive” box-game, “The Hitch Hiker’s Guide to the Galaxy” and I have to admit, it totally defeated my 5th (and 6th) grade self. I never could figure out how to get the babble fish in my ear. With my defeat (and the onset of adolescence), I moved away from spending hours at my keyboard playing games, to…. spending hours at my keyboard writing fan fiction (as you do).

Like most nerds who were in college in the early 1990s, I re-found my love of the text-based games as I discovered MUDDs. It was the perfect mix of being able to D&D (without wondering where my D20 went) and the text-based games of my youth. I never got into world building (I have also never GM’d); I was strictly into game play and random, middle-of-the-night chatter with college students on other continents. I eventually stopped playing because this guy I met in-game got a little too intense and it creeped me out, and at about the same time I met a guy in real life who did not creep me out.

Anyway… here I am, a 40-something professional astronomer. I feel like it’s been several lifetimes since I sat in a Michigan State computer lab telnetting off into another world. The thing is, part of me goes through each day wondering if I’ll be eaten by a Grue. I now roll my D20 in battle against peer-review, and I wonder if I have enough experience and charisma points to carry my grants from pending to awarded (and worry that diplomacy, which I’ve never had much of, will be required).

Leaving on this trip to Hawai‘i to attend the IAU… it all just felt so surreal. All around me, it seemed like the world was burning, but here I was flying to Hawai‘i to attend 3 weeks of meetings held at tropical resorts. (How is that even a thing?) I earned my travel by working on the IAU Daily Newspaper, and by giving 3 presentations at Astrofest. I’m going to try not to think too hard about how much money others spent on my travel. It all feels a bit obscene, but I worked hard, I didn’t pick the meeting venue, I am a society officer, and I did have meetings to attend as we worked to plan out our exceedingly unstable future.

If I acknowledge reality, I’m Schrödinger’s Astronomer; I’m both dead and alive as I wait to hear on grants. I currently have significant funding pending across three grants, and if I get all three, the funding will keep an entire team of us science’ing for five more years. If I get only the smallest grant, I will struggle on for 2 more years with 2 others while we keep killing ourselves applying for funding that just might not ever come. And if I get none of the grants… I’m kind of unemployed along with several others I care about (and this is the future I’m trying really hard not to think about).

Flying away to IAU, I had to assume that I’ll still be a professional astronomer 3 years from now. I had to fake assuming that once again I’ll somehow make it. I’m a leader and “the” so-called expert in random things online and digital. I have to just tell myself that everything I’ve worked to build will keep on keeping on.

But it all feels like a game in which I just keep rolling 1.

As I set off for Hawai‘i, somewhere in the back of my head, a voice inspired by reading Edward Cline’s Ready Player One decided to start sarcastically responding to reality like it was all just some text-based roll-playing adventure. This was the sarcastic, less-filtered 5am version of me that is usually hidden except from fellow con-goers and the folks I pull all-nighters with as we slam out code or grant content. In a moment of WTF, I gave this inner “director’s commentary” voice my Twitter feed to play with.

And for 3 weeks, I mostly only read my mentions and mostly stayed away from the news as I focused on the here and now on an island a thousand miles and 5 timezones away from everything. For those 3 weeks I shared my life like it was an RPG, and I have to admit, as I wait to hear on those grants and as I fake it as I hope to make it, maybe it is an RPG where my program officers are actually the GMs.

I got home five days ago.

I haven’t really tweeted since I got back. I dove in and looked (and replied) a couple times, but I knew that once I started tweeting again it would mean “it” (whatever “it” was or is) had ended.

I’m home. I have bills to pay, emails to answer, reports to write, and research to chase. I’m home and everything just keeps going. I’m still Schrödinger’s Astronomer, and I have no idea where things are going… but it’s time to roll my D20 again, and see how many hit points I have against this Grue. 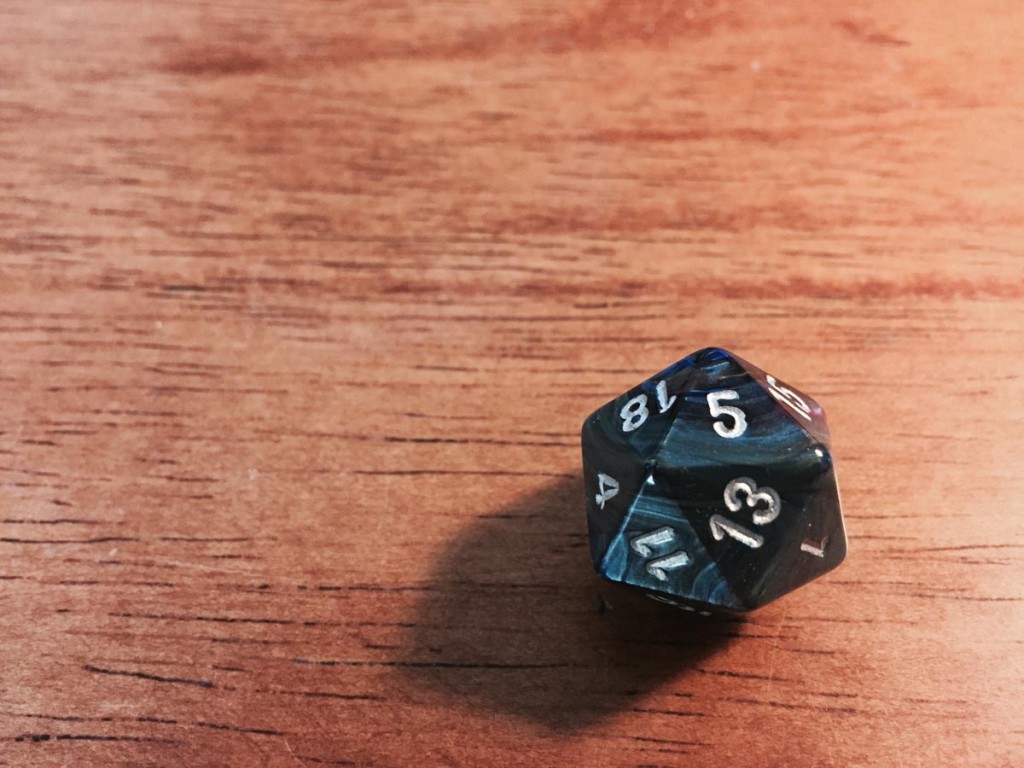