Imagineering a new reality without abuse

Friday was one of those days that started out entirely normal and ended in a total paradigm shift. It was the day Geoff Marcy’s wrong doing woke us all up, and it was the day Chris Ford helped me see what “right doing” can look like.

As I am so often, I was traveling. In this case, I’d flown to San Fransisco for a board meeting of the Astronomical Society of the Pacific. This is a board I sit on with many astronomers and astronomy supporters who I deeply respect and who are in their different ways working to promote engagement in science by diverse audiences. Like also happens so very often, Friday was a day when my social media stream was exploding with news of a prominent scientist who had done a thing (or in this case, many things, see Buzzfeed, Mahalo.ne.trash , Skepchick) negative to the careers and well-being of women. It was just another day of suck, and of trying hard to make it suck less.

This is perhaps the ultimate of diminished expectations, and I have to admit, there are days – days like Friday – when even this seems like an unrealistically lofty goal.

By the end of the day, I was done with reality. I was ready to go back to my hotel room and just play Carcassonne on my iPad and wish for something I thought was impossible – a world that that didn’t hurt. But as we were packing up and sorting rides, I was offered a sweet distraction. Fellow board member Chris Ford offered me a chance to take a ride with him in his Tesla Model S over to his offices at Pixar.

What I didn’t know was he was asking me if I wanted a glimpse at the way academia could be reimagined if only people were valued.

Pixar is a place of beauty that makes you laugh as you look around. There are cartoon characters looking out of inviting spaces, and comforting furniture waiting for you to sit down and just dream a little. We arrived as the Sun moved toward the golden hour and everything seemed to glow. It was special, … But I’ve been to other beautiful places with inviting spaces and this doesn’t entirely impress me any more. What impressed me on this tour, what shifted something inside me and forced my thinking into a new configuration, was the way Chris described the work environment at Pixar. 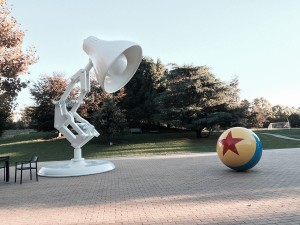 As we moved between color boards and characters’ test sketches, this brilliant programmer painted a verbal picture of a work environment designed to protect and cherish the creative and inventive mind. From building in a myriad of collaborative spaces and play spaces, to teaching classes for employees that make it possible for anyone with a will to rise from the mailroom to the illustrator’s table, Pixar strives to foster its employees’ personal growth. What’s more, he explained that failure is recognized as sometimes a necessary ingredient in defining a new path to success, and it’s understood that sometimes people will go through fallow periods and people sometimes need space to re-energize and to work on personal projects between working on big company projects.

He went on to explain that the kinds of hate speech, harassment, and constant belittling that is just part of being in academia are not tolerated. After all, if you’re trying to get the best out of people, why would you allow an environment of bullying? If you’re trying to be innovative as you advance your field of research and all related technologies, don’t you want to create as healthy a workplace as possible? He explained that by having an at-will work environment where people are nurtured, Pixar has created a place where people want to do their best and protect the secrets of the worlds they are inventing on paper and in software.

As Chris spoke, and as we walked through this campus of sports facilities, theaters, collaboration rooms, and server rooms, Chris said that they work very hard to foster an environment like academia, and I found myself correcting him, saying that what they are creating is the ideal that people often imagine must be life in the academia.

And as I corrected him, I wondered, what would life be like if universities did everything they could to support the physical, emotional, creative, and intellectual well being of their faculty, staff, and students? What if we had resources and support and what if there was an atmosphere of kindness instead of competition?

Today, many of the brightest minds in science go through life constantly struggling for funding as they work in environments that often have them surrounded by crumbling infrastructure, crammed into insufficient space, and dealing with colleagues who on the best of days are simply unprofessional and on the worst of days are abusive physically and verbally. It’s contagious, as the “why do I bother?” attitude sweeps you in. It is hard to be polite when it seems that all you hear is impossible demands to do more and more with less and less and less.

But what if? What if we were resource rich and hatred poor? Think of how much more we could accomplish if women never had to spend time warning one another about the men who molest? What would we discover if every man and woman of color faced no discrimination? How much more would we have already solved if only hate was put down and a desire for mutual success was lifted up?

I’m often asked by friends who work in the private sector why I don’t leave and find a healthier work environment and better paycheck working in industry. “Come be a programmer”, they say. “Come where that shit isn’t accepted or allowed.” I have to admit, until I walked through Pixar, I didn’t really get it.

And now that I understand, I’m still not planning to leave, because if I did, how few would be left who understand?

What we’re lacking in academia is a paradigm of mutual support and intolerance to cruelty in all its racist, sexist, and just plain hateful forms. We say the words – we claim to believe in mentoring and nurturing and community and collaboration – but words are not actions and the reality is we collectively find it easier to let people build up thick layers of scars instead of putting an end to the behaviors that cut at the hearts of our every community member.

On Facebook today, I saw senior men struggling with how to come to terms with their own silence. They are admitting they knew about Geoff Marcy or they know of others who are just as bad (and sometimes worse) who still litter our profession, and they are struggling with the personal, legal, and all too emotional issues of having been silent and thus complicit in the sexual harassment of women. I am seeing women talk to one another about the documents they’ve signed that seal their stories and allow the men forced to leave one university to become endowed chairs at another. We are trying to figure out if the Freedom of Information Act can free us to stop these men from harming others. And I see the people of every minority community – that too small community who aren’t cis hetero white – all saying “But have you seen what happens to us? Because wow, it’s bleak over here too…”

This is the week the wool over our eyes has been removed, and everyone is blinking hard against the Sun. We have a moment to try and make things better – a moment to say, “We’ve had enough” and to ask, “Can we change? Can we be better?” But if we pause, people will simply pull the blanket back over their heads and go back to pretending everything is ok, and hate is just part of being human and the best will always thrive despite…despite, well, everything.

I’m grateful for everyone standing up to demand that Geoff Marcy be evicted from our field, but I’ll remind you, he is just one of many abusers.

Today, there are women all over our field watching this and asking, “Does my story have to make Buzzfeed before someone will stand by me?” Stand by them. Support them. And most importantly, start the discussions with your colleagues that are needed to fight for them.

It’s way too easy to ask the women, “Why don’t you leave?” and the only way to stop asking them – the only way I’ll stop hearing the question – is if we find the courage to say, “What is happening is wrong, and I won’t abid it continuing.”

We need to reimagine our field without hate and make that dream our new reality.

I need your help.