I was born in December 1973, 1 year and a few days after the United States’ last crewed mission to the moon. I have been engaged in research astronomy since I was 17, and have spent the entirety of my career being one of the youngest in the room. I’m still called “young lady” in professional meetings, and teased for not remembering Carter (or Johnson or Nixon). While the millennials are coming up behind me, fighting to define new paths, my generation is still getting lost in the shadows of our light hogging senior peers. At some point, I keep expecting things to change as my generation becomes “senior”, but that change seems to be on hold – maybe permanently – for many (most?) of us. The reasons are complex and are steeped in the history of the industrial and educational complex that grew up around the Apollo landing. Today, I find myself worried that when that Apollo generation does retire, there won’t be a healthy, established community ready to fill their shoes; I’m just not sure those of us still waiting can wait that long.

This is the first in a 2-part series on the broken job pipeline. This essay overviews how we ended up with an over-population of elder academics. In the next (likely shorter) essay, I’ll look at how the lack of secure jobs coupled with consistently delayed Federal budget bills, is effecting researchers.

Over-population: The Echoes of Historical Funding 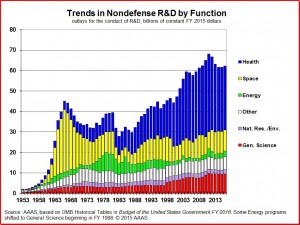 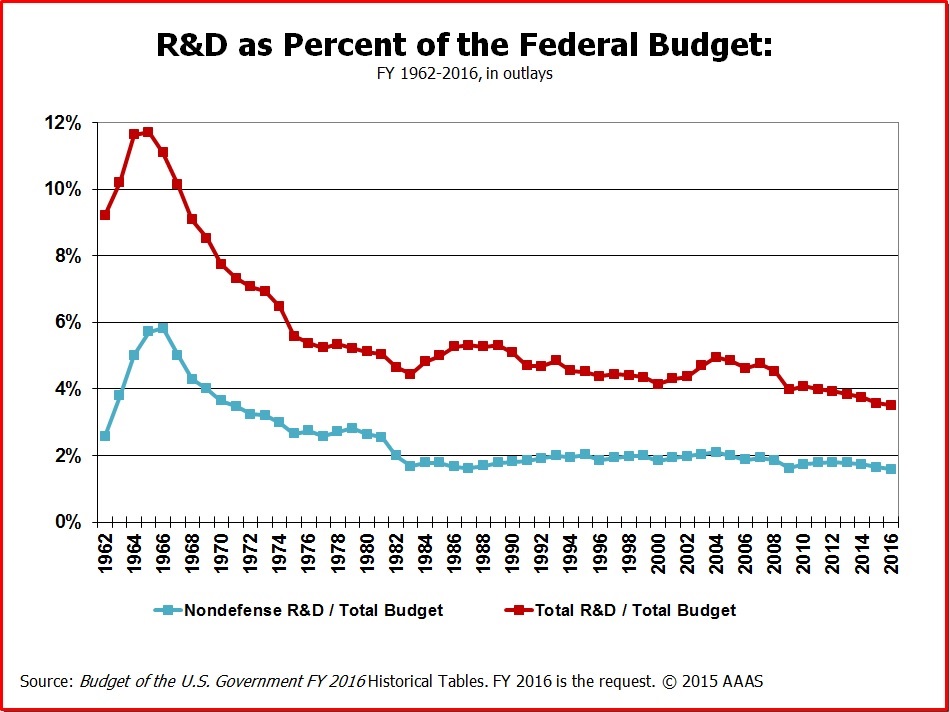 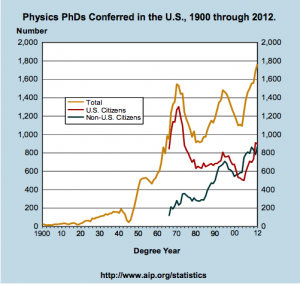 In the late 1960s and on into the early 1970s there was a massive push to invest in space-related research and science-related education. This push is reflected in both the percent of the US budget that went into research and development (R&D) and in the actual dollars spent. No matter how you slice the numbers, they point to science being something our government spent money on (past tense) [AAAS]. With this historic increase in funding, we also see a corresponding increase in the number of people receiving PhDs and going into faculty positions [AIP]; positions they are still in today.

Someone who started college the September after the first Apollo landing would be about 64 today. While the minimum US Federal retirement age is 62, the average retirement age of faculty is somewhere north of 70, with some studies showing that as many as 15% of faculty wait to retire until they are in their 80s (1, 2, 3). Those who were in grad school during Apollo are just hitting that age 70 “maybe I’ll think about retiring” threshold. The reasons these men (and a few women) aren’t retiring are complex. While a lack of sufficient savings (given the economic downturn), unexpectedly insufficient state pensions, and the collapse of the housing market all play their role, they are accompanied by a strange companion – academics generally love what they do and don’t look forward to retiring to do something else. Not wanting to retire because you don’t want to lose your access to libraries, research equipment, and everything else that makes research possible is an entirely valid reason not to retire. Without a steady stream of retirements to balance the steady flux of new PhD’s, overpopulation occurs.

In an ideal world, the space related fields would be growing in ways that would both allow the non-retiring seniors to stay on while new jobs were being created for new graduates. That isn’t our reality, though.

Today flat budgeting is the new “up,” and state and federal expenditures on higher education and science are largely holding constant (at best!). While students are facing an unholy burden of massive tuition increases, this isn’t sufficient to compensate for universities increasing baseline costs. From having to pay more for buildings, energy, and all the other facilities (and administration), to having to pay more so they can keep up with increasing reporting requirements, to just having to do more (adding and upgrading computer networks, for instance), universities are just… stuck. Often, the first two things to happen are overall enrollment numbers are increased (if possible) and departments with low enrollment numbers are cutback. In all but the best institutions, the number of physics and astronomy majors is counted in the tens, with just a handful of students graduating each year. With some university graduating classes being several thousand, it is easy to justify eliminating a physics degrees that only graduates a few as a cost-savings measure.

Downsizing physics and astronomy departments takes many forms. The most “gentle” way is to just not replace faculty who leave. While this may lead to the “A ha! So people do retire!” thought, the truth is that while some people do indeed retire, faculty leave for many different reasons, ranging from leaving to take positions at better/closer to family/further from family/culturally different/just different institutions, to failing to get tenure and being asked to leave, to just wanting a job in industry that pays better. At my own institution, our physics department has seen 6 faculty leave with only 2 retirements. Only 3 of those positions were replaced. This is kind of typical right now. But, this is the “gentle” way that departments slim down. Much more cruelly, some places have actually eliminated faculty lines so that young faculty just starting were never given the chance to ionize from tenure-track to tenured. Instead, they simply had to leave while their elders stayed.

While physics and astronomy departments are nationally slimming down, the number PhDs being produced is once again on the rise (remember that whole “Increasing enrollment” thing up above?). The best of these individuals get purgatory positions called “Post Doctoral Fellowships” (or just “post docs”). These positions are typically for 2 to 4 years, and at the end, you are off to find a new position. Most post docs are only open to people who are within 7 years of completing their PhD, so folks who don’t land the elusive “real job” fast enough are kicked out of the game. They go on to become computer scientists, school teachers, writers, retailers (the dude behind Subway had a physics degree!), and as I learned one horrifying moment in Baltimore, sometimes the guy who was a PostDoc at [redacted top institution] goes on to become the dude stocking the hotdogs at the Big Chain grocery store.

When I got the American Astronomical Society Job Registry today, there was screen after screen of post doc positions available, and less than a handful of tenure track positions. There were no general positions open for mid-career people like me. None. If I wanted a job… I couldn’t find one. Not today.

Once upon a time, in a mythical Ivory Tower I can only see in my dreams, the starry-eyed young PhD would move from diploma to post doc to tenure track in a graceful career arch. After 6 years, often before they turned 40, they’d have tenure and (if they wanted it) a job for life. With tenure in hand, they became free to do research that might fail, to point out flaws in the system that might earn them wrath from their administrators, and to otherwise pretty much do and act as they pleased. Those without tenure, they have no security and must make sure they don’t annoy those above them. In many ways, the 6-years of the tenure track is nothing more than a very long hazing ritual. Yes, you have to do rational things like prove you can do independent research while successfully teaching classes while also serving on committees… but… That is a lot of unnecessary gauntlets often thrown up along the way.

But if tenure track faculty are the pledges in a fraternity, the non-tenured/non-tenure track faculty are the people who didn’t even get a match. They are the ones who may or may not teach, and whose salary may go up and down at the whims of their seniors – their PIs, their directors, their program officers… And they sometimes just wake up one day and have that last rejection letter telling them the grant they applied for only had a 4% success rate and they weren’t in the top 4% and they won’t be funded. With that email they realize that they no longer have a job when the current round of funding runs out in weeks or months. 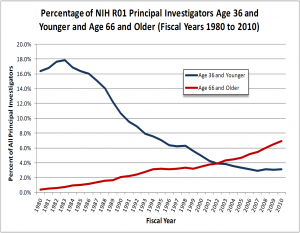 Meanwhile, as universities struggle for funding, senior faculty that might once have settled into mentoring, administration, and asking for small amounts of funding on random grants are now looking for more and more major funding. This has radically changed the demographics of who is getting grants. While I couldn’t find a physics and astronomy specific graph, a study by the National Institutes of Health shows the trend in that field, and… it’s striking to see how early career researchers are just not getting funded as the principal investigators the way they were just 20 years ago.

The impact of not funding early career researchers goes beyond the basic, “If you don’t fund them, they can’t do research” problem. It also effects how they are perceived. The elders in our field, who grew out of the Apollo boom, came of age in an era of riches (20% or better success rates on proposals) and they don’t always understand that today’s juniors aren’t failing to get grants because they are failures. With a modern 5-10% success rates (or worse), proposals rated as excellent with no weakness may not get funded because on the day they were ranked, they just weren’t lucky enough to be anyone’s favorite project. It isn’t enough to be excellent – you also have to be lucky.

To that now senior researcher who had tenure by 40 and was consistently funded as a baby academic, my generation seems to be nothing but fail. Many of us went through 3 postdocs, landed in a soft money job, and somewhere around 40 tried to start that tenure-track challenge. This drawn out path isn’t because we suck, but because to make it this far we’ve had to always be the best of the best of the best, and as good as we are, this is the best we’ve done. Yes, some do achieve things like Nobel Prizes before 40, and some do get tenure young, but… but the Apollo era scientists are still out there dominating the field, and when they wonder why all of us didn’t succeed like them, they need to offer us a hand up instead of a push down.

I’m still called “Young Lady” in professional meetings, like I’m a misbehaving tween. I hear those words from the permanently funded peer and I bite my lip because I may need help from someone with their job security. I get teased for my youth, and I bite back the temptation to call them “Grandpa” as they discuss how hard it was for them back in the day. It’s not their fault they’re older than my dad, and are still doing the job they love. I just wish they’d let the spotlight shine a little more brightly on the next generation. I wish maybe they could mentor and administrate and free more people to succeed in the places where they already blazed a trail. I don’t demand they leave… I just wish they’d make room for others beside them so that maybe we could get around and start to blaze our own trails.