Rerouting or How Google Maps Tried to Kill Me

Because I wanted to take a pretty photo, Google Maps tried to kill me.

I’m currently in Utrecht, the Netherlands for a conference. My hotel is in the city center, and the conference is a few kilometers away at the University. The conference site recommended biking, so I rented a bike for the week.

Bikes here are just enough different from bikes at home that I’m not as comfortable zipping around and weaving between other cyclists as I might usually be, and I don’t start out as that much of a zipping weaver. This personal discomfort leads to a fair amount of trepidation about making left hand turns across roads in heavy bike traffic. 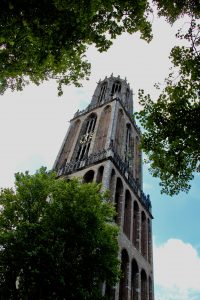 While kind of zipping along this morning I totally missed a left due to dense bike traffic and I triggered the Google “Rerouting” thing. While it was sorting a new route, I spotted this gorgeous tower and decided going an extra block wouldn’t be the end of the world, so I went an extra block, took the photo below, and instead of going back to the turn I missed, I let it reroute me through old Utrecht.

This was a mistake.

As I worked my way back toward my intended destination, I found Google resolutely telling me to go the wrong way down one way streets… Um… ok? I’m on a bike, maybe that is a thing here? The roads were utterly empty, so, whatever.

And then it told me to TURN RIGHT NOW onto a fairly busy road. As an American, I know this can be a thing. I’ve more than once plugged along the side of a 55 mph road as the highway bridged from one bike route to another, but… this is apparently not a thing in the Netherlands.

As I was going along on my single gear hipster rental road bike at all of about 10 mph (maybe), on a 70 km/hr road I was being honked at and decided this was not where I belong. There was a canal to my right and I saw no where to get off, so, fuck it, I just kept going.

And then a motorcycle cop pulls up beside me and informed me I was on the highway.

I went straight into “I’m so sorry, I was just doing what Google Maps said, and I can’t figure out how to get off. Please, how do I get off?” He kept starting to do an angry “You can’t listen to Google, there is no where that a bike belongs on a highway,” and then would trail off realizing I’m an American and maybe in the US… And he’d repeat “You can’t listen to Google.” He then said he was going to ride behind me, stop traffic, and get me off the highway. He got me across three lanes, we did a u-turn at a busy intersection, pulled over on the other side of the highway, and he pointed at the bike trail about 15 feet away through high weeds and told me to go over to the bike trail and stay on the bike trail.

I picked up my bike, said thank you, hung my head, and walked through the weeds with my rental bike.

Lesson learned – when you decide to reroute to take a pretty picture, you must go back to where you deviated or Google just might try to kill you.