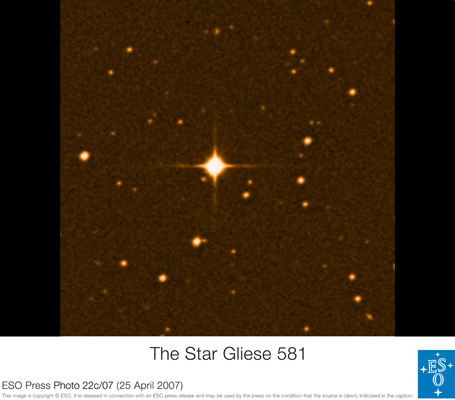 There are certain questions and dreams that drive society in its quest for the stars. Is there life beyond the Earth? How (and when) will we reach other worlds? What will it take to reach other worlds with life? For a long time, astronomers thought that we were still a long time away from being able to find the type of planets a person can actually stand on. Until within just the past couple weeks, we had assumed that it would take a new generation of space missions – Terrestrial Planet Finder, Darwin, some space-based interferometer – before discovery of these rocky worlds started entering the scientific literature.

But as soon as we think we know something, the universe has a habit of surprising us.

On April 25, the European Southern Observatory announced the discovery of a planet, Gliese 581c, with a mass M sin i* = 5 times the mass of the Earth. This is the smallest world that has thus far been found, and the first nearby world that we are fairly certain we can stand on (or at least sail a boat on). This little world is just 20.48 light years away. Using our fastest current space craft, New Horizons, and traveling at its zippy 10 mi/s, we could be there in just, um, well… 382,828.56 years.

While Gliese 581c is beyond our ability to consider traveling to, it is representative of a new class of objects: Rocky planets orbiting red dwarf stars. Red Dwarf stars are K and M class stars with temperatures between 2500 and 4000 degrees Kelvin, and masses less than 0.7 solar masses. Their luminosities range from 0.1 solar luminosities down to just 1/100,000 solar luminosities. While faint and cold, these stars have one major thing working for them: they are stable for extremely long periods of time. Planets formed around these stars would have the potential of watching their home star burn hydrogen to helium for as many as 50+ billion years.

Red dwarf stars are the most common type of star in the universe. Within the 100 nearest star systems, 100 red dwarfs have been identified. Each of these little red stars represents a possible solar system. Any society that grew up on one of these worlds could imagine itself living essentially forever.

This is a point I find strangely fascinating. Here on Earth, life began about 4 billion years ago and we have less than another billion years to go before our Sun makes things too hot for us to survive. The clock is ticking and we are in our planet’s twilight hours. This gives me a back of the head, “We must learn to explore,” primal urge for our civilization. A world with a 50+ billion year future… That’s longer than our universe has existed. Life on that world would see the future stretching before them with noon far in the distance.

So, what could life on Gliese 581c feel like? The world is projected to be 1.5 Earth radii in size. This would make a human feel like they were 2.2 times heavier. The planets temperatures would depend greatly on the atmosphere. At a minimum, they would be just above freezing, and at worst, it would be way too hot due to green house effects. There is also a neat in-between possibility – the world could be tidally locked like our Moon is to the Earth, and as it orbits its Sun every 13 days, the same side of the planet constantly rotates to face the Sun, while the same side of the planet stays forever turned only to the stars. In this case, one side would be very hot while the other would be cool (or cold, depending on atmospheric and oceanic heat flow). Potentially, life on the planet would be like living under a red heat lamp – dark and murky but warm.

I am on the record as saying I think intelligent life is rare at this time. It should be noted that as far as we know, this world doesn’t have a Jupiter protecting it, so… One of the criteria we believe is necessary for intelligent life to evolve isn’t met. BUT… With so many years ahead of it, this world might be able to out last the comets and asteroids, and wait to form life later, after all the space junk has been swept up.

So, while our future is bleak, the future for this little world is cold and red and stretches out for a long long time.

*The M sin i term means the actual mass is likely higher. Sin i can vary from 0 to 1, with the most likely values statistically being around 0.5. This means the most likely mass is actually ~10 solar masses, but I, like the rest of the media, am going to wishfully assume it is actually the ideal 5.0ish Earth masses.