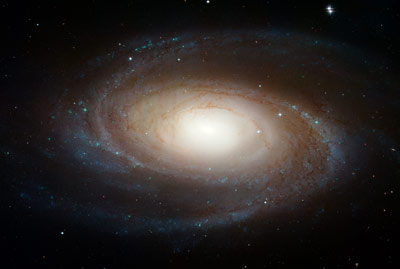 This mornings first press conference spanned the scales of the Universe. From a high speed dwarf galaxy only 1/20,000 times the size of our galaxy, to a new picture of M81 (a nearby spiral galaxy – image shown), to information on how a lack of gravitational pull is causing the local group to wander away a local void, the scientists took us on a wild ride through the universe.
Andromeda XII: In results presented by Dr. Jorge Penarrubia (University of Victoria, B.C.) on behalf of lead scientist Dr. Scott C. Chapman (University of Cambridge), a new, high-speed dwarf galaxy unveiled.

It’s name is Andromeda XII, and its speed indicates it is an evader that came from beyond (beyond the local group that is), and represents our first chance to get a good look at an unperturbed dwarf galaxy.

This system was first discovered October 2006 using the the Mega Cam on Canada-France Telescope during a wide-field survey that was searching for dwarf galaxies associated the nearby Andromeda galaxy. This system was originally seen as nothing more than a blip of stars that had colors and magnitudes (brightnesses) in a color-magnitude plot that indicated that they belonged to the same population. This system is so small and so diffuse that it doesn’t standout against the background stars and galaxies.

Followup observations taken with the DEIMOS spectrograph at Keck II telescope show that this small family of stars is physically related, and are all moving together at a speed of 281 km/sec toward the Andromeda Galaxy (M31). This speed is so fast that it can’t be orbiting M31, but rather must have formed somewhere else and then been gravitationally pulled into M31.

According to Zezas, And. XII likely formed 3.3-4.5 million light years (1.0-1.4 Mpc) away from Andromeda, and is now on its first pass through the local group. This is particularly exciting because dwarf galaxies are considered to be the building blocks of larger galaxies like our Milky Way. These systems formed first, and in a bottom up view of galaxy formation, they coalesced into larger structures. Previous to this discovery, all the known dwarf galaxies were bedraggled systems that had been knocked about, stripped of materials, and in some case torn into tidal streams through gravitational interactions with other systems. This means we haven’t been able to get a clear understanding of what the building blocks off our galaxy looked like originally.

This system, gives us our first chance to see the raw materials of a galaxy. While hard to study due to small size, faint nature, and large distance, it is a start. (And if you want to look toward it without actually seeing it, the stars are in the same binocular field as M31).

M81 in detail: M81 is a well known spiral galaxy that can be seen from dark locations with binoculars, and from less dark locations with small telescopes. The Hubble Space Telescope recently turned its ACS camera at this little system, and for 2.5 days worth of exposure time, captured the system in detail. Clearly visible in a zoomable version of the image are large stars, star forming regions, and globular clusters. Also apparent are background galaxies the before had simply melted into the light of M81. This spectacular image will be used to study the star formation history and action in this nearby galaxy.

Void Not Pulling: In the final announcement of the morning, Dr. Brent Tully (University of Hawaii, and famed for the Tully-Fisher relationship) laid out a nice bit of vector addition that shows that while our local group is getting pulled toward the Virgo Super Cluster, Great Attractor, and Shapley Concentrations (all large groups of galaxies and collections of galaxy clusters), it is also not moving toward the local void. At the edge of the local group of galaxies, there is a giant void containing 120 million lightyears of just about nothing. The normal, random distribution of galaxies that forms a clumpy sphere around us generally pulls gravitationally on the local group at very levels. They void, by not pulling on us, lets us drift away from it. This effectively causes the void to grow (as things get pulled away from it, leaving emptiness behind). This is just part of the standard evolution of the cosmology from swiss cheese with small holes to swiss cheese with giant holes and really dense cheese between the bubbles.

The lack of gravitational pull from the void, actually allows our galaxy to move at roughly 260 km/s away from. Its always neat when the lack of something can cause a motion.
The next press conference is in 20 minutes and it is predicted to be the big one of the day. More to come. After that, I’ll be off to the poster room and conference center to see what NASA has to give away.