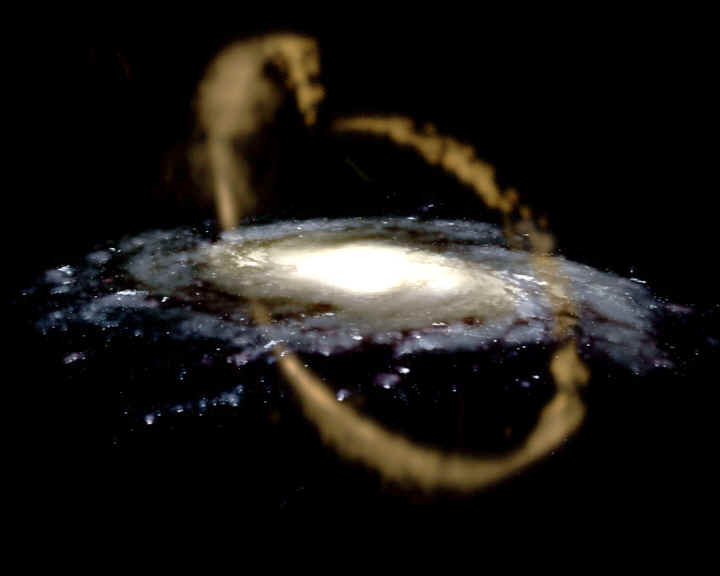 It has long been known that there are stellar interlopers in the solar neighborhood. These stars just passing through as they orbit the galaxy on a path that originates in galactic halo. Unlike the stars like the sun that normally live in the galactic disk, these stars are poor in metals (have low amounts of atoms like iron), and extremely old. Recent work by a team lead by Amanda Kepley (Case Western Reserve University / University of Wisconsin), seeks to untangled the history and structure of immigrants from the halo.

Kepley’s team looked at 231 stars within 25,000 2,500 parsecs of the Sun that are less than 1/10th the metal content of the Sun. This sample includes stars with accurate distances, velocities, and metallicities. They find 5% of these stars appear to be streaming into the disk, raining down around the solar system from a system the Milky Way consumed 6-9 billion years ago. This stream was originally noted by Amina Helmi (University of Groingen) and collaborators in 1999. In Kepley’s work, they find these stars are formed out of gas and dust that was enriched primarily by type II supernovae.

Other stars in Kepley’s sample appear to also come from the normal (and random) distribution of halo stars, as well as from tidal debris of systems destroyed in the past. Six stars in the sample are moving in retrograde compared to the bulk motions of the stars. These stars could come from a side impact collision with a small galaxy.

On the surface, Kepley’s work is a detailed study of how a lot of stars are moving, and it boils down to many remarkably boring tables. Looked at broadly, this paper shows that our galaxy, even locally, is a dynamic place that shows evidence everywhere of past collisions with small systems of stars (systems like dwarf galaxies). As more and more studies like this one are completed, probing larger and larger distances into the galaxy, we will be able to build a detailed picture of our galaxy’s history that includes information on which stars may have been stolen from other galaxies, and what the stars in those shredded systems were made out of.

Just 15 years ago, we didn’t know if the galaxy formed out of a lot of small systems combining into a larger galaxy, or if our large Milky Way galaxy formed in situ from a large cloud of gas that fractured into us and the smaller systems. Today, thanks to all the observations of tidal streams and stellar populations that are being done, we can say with certainty that our galaxy was build out of the pieces of smaller systems.

Boring tables lead to exciting understanding, one data point at a time.