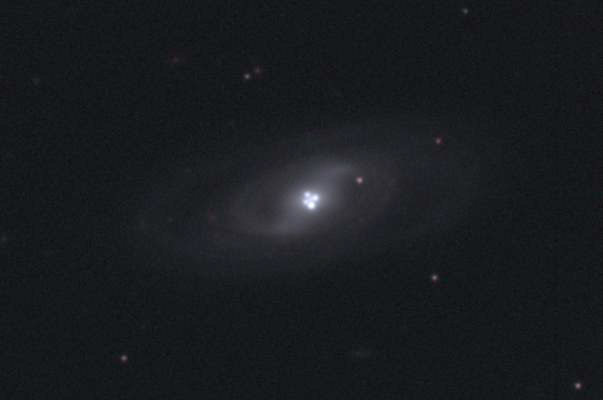 While going through journal articles today, I came across a really neat paper on teh apparent variability of the different images of the famous lensed quasar, Einstein’s Cross (Q2237+0305, in science speak). The light from this distant quasar is blocked from reaching us directly, and is instead bent toward us along 4 different paths by the nucleus of an intervening spiral galaxy (image left, credit:Â¬â€  J. Rhoads (STScI) et al., WIYN, AURA, NOAO, NSF). Each different image provides us a snap shot of the quasar from slightly different angles. While many quasars with split up images have significant time delays between one image and another, the images in this situation have negligible time delay.

Astronomers in Switzerland and Washington, lead by A. Eigenbrod, observed Einstein’s Cross spectroscopically using the Very Large Telescopes in Chile. In a study spanning 2 years, they systematically mapped the structure of Q2337+0305 using microlensing. Here is what is happening: The light from the quasar bends through the intervening galaxy along different paths. Over time, stars in the galaxy will pass through these paths. When a star enters the light from the quasar, it magnifies the light (this is called microlensing). As the star passes in front of different parts of the quasar, those parts get their light amplified, while the other parts stay at a constant brightness. Over time, the star will move across different parts of the quasar, systematically amplifying new areas. By measuring what is amplified over time, as a star crosses, a map can be built.

This process can’t usually be used because different parts of the quasar naturally vary in brightness. Under normal circumstances it isn’t possible to determine if there is microlensing or if the quasar is fluctuating just because it can. In the unique case of Einstein’s Cross, observers will see the quasar’s natural variations in all four images while microlensing events will only appear in one image.

In looking at Einstein’s cross, Eigenbrod and his team specifically studied how different atomic lines, which come from regions of different densities and temperatures, varied over time. This allows detailed density maps to be built.

In their initial study, they saw significant variations in 2 of the 4 images in Einstein’s cross, and as they watch they expect to eventually see variations in the other images as well. The differences in microlensing in the four images is related to the distributions of orbits in the intervening galaxy, and its willingness to provide stars to orbit through each of the images of Q2337+0305. Over time, as more orbits have a chance to send stars across the images, more and more details maps can be built.

This is one of those really great cases of the universe providing some really neat built in tools, like Easter Eggs hidden among the stars.