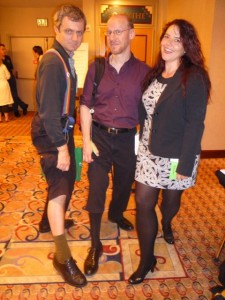 I seem to be spending a ton of time hanging out with Skeptics at this conference. It is fun. But before getting into the serious, I’m going to be silly (thus the image at left).

I’ve been hanging out with (left to right) Richard Saunders and Phil Plait a lot, and here we are showing a little leg. Silly enough? (In general, this place is filled with people with truly killer shoes. We aren’t among those with awesome shoes, but mine are at least cute 😉 )

So, I was saying I’ve been sitting in on Skeptics sessions most of the weekend. Currently I’m sitting in on one that is about Dogma versus Skepticism. A very good point was just made by the speaker: He pointed out that someone who holds on to the Belief that God can not exist is just as dogmatic as someone who has no doubt that God does not exist. He went onto explain that it is possible for someone to be both a theist and a scientist. I’m so glad he said that, because it’s true.

As a scientist and a skeptic, I’m more than willing to say that I can’t prove that God exists (I’m much more skilled at proving the Big Bang existed), but I also can’t disprove God, and so I choose to believe (see link under About if you want to read more about my belief system). I also know from earlier discussions that I am not the only skeptic in the room who is some species of Christian (although I won’t out anyone).

This is the first time I’ve been in a large population of Skeptics and not experienced a ton of Christian slamming. Instead, what I’ve seen is specifics slamming. In dealing with people with non-logical world views based on no evidence or fake evidence or imaginary evidence, we can’t simply walk up to them and say “Your belief in God is false.” We can’t prove that. What we can do, however, is walk up to them and say, “The Earth is more than 6000 years old, let me prove it.” I can walk up to someone and say, “Let me show you ways to test if psychics are real so you know if you’re being fooled.” I can take on ghosts, aliens, Big Foot, and little green men with science and come out showing them with logic how their worldview is broken and offer them some experimental truth without taking away their God.

What we need to do as skeptics is teach reasoning and show people how understanding the world around them can keep them safer. We need to rebuild how they look at the world from the ground up and help them build a strong foundation of curiosity and the scientific method. We live in a wonderfully fantastic universe, and with science, what we understand can be seen as far cooler than what our limited imaginations can falsify when we step into the world of woo-woo insanity.