A Morning of Phoenix 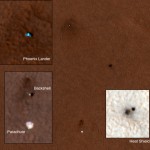 Phoenix Lander on Polygon Structure as seen by HiRISE

(disclosure: I left my cellular internet dongle in my room, so I’m twittering sessions live and posting blog entries on a semi random basis when I can go out and find internet)

I’m leaning against the back wall of a packed ballroom filled with the brim with silent and attentive geophysicists who are absorbing all they can about the Mars Phoenix Lander.

This fairly large (5,5m or 18 ft long) and heavy (350kg or 770lb) spacecraft parachuted to the surface of Mars on May 25, 2008 and poked, prodded and dug into the surface until it froze to death on November 10. While this seems like a short period, the original plan was to wind up operations in August, so the craft had been living on borrowed time. While it is unexpected that the craft will be able to turn back off when it thaws in the next Martian Spring, the lander is programmed to phone home should it survive.

If you want to go back and see what the mission knew in the moment, it’s all recorded on twitter. Check out: http://twitter.com/MarsPhoenix

Today is all about what we can now say with certainty.

The session started with a broad overview of the results everyone was waiting to hear: Is there evidence of past liquid water and is their the possibility Mars can (at other temperatures) support life. The answer is a qualified yes.

Additional work looking at the variation of ice with depth found that it matches models, and that based on the fact that the rocks aren’t frozen into the ice, but rather are capable of getting flung out of place by casual assualt by alien space laboratories, the ice is old. (Over time the ice contracts, loosening around the rocks).

There was also work that showed that the fascinating polygon structures surrounding the lander are likely caused by seasonal cracking that occurs when the ice contracts and sand and small rocks fall in between the gaps in the ice. The “flat” part of each polygon typically measured 4-5 meters in diameter and have multiple lumps and peaks indicating there is multiple events building these structures. Unlike on Earth, where these can be caused by frost heaves, these patterns are caused by sand wedges.

Sadly, I know need to go play scientist and be part of a telecon. More to come on the other side…