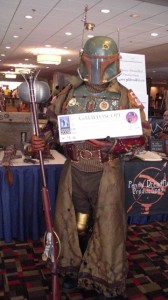 Last week I had the opportunity to go to Dragon*Con, where I slept too little and ran real hard. It was good, but I have to admit it is all a blur of images and emotions. When I try to think of those 4 days in Atlanta, my brain responds with flickering fragments of moments.

I’ve posted many of my pictures on flickr. Others are doing the same. I’m sure the story is documented (perhaps too well), and if you have images, can you please share links through the comments? 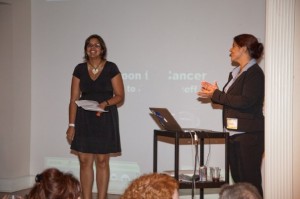 Masala Skeptic and I at "A Full Moon for Cancer"

But now I’m on the road again, 3000 miles away in San Francisco. It is another day, and yet another city. Strangely, my hotel room – another Starwood hotel – looks absolutely identical.

Dragon*Con was fabulous. But it is over. And some of my dearest Con friends I didn’t get to spend time with at all. To fast it flew. But next year, I will say yes less and breath more as I speed walk instead of spring from Friday to Monday. Dragon*Con 2010, I will be with you.

And I’d like to leave you with one final video from D*C 2007 that just makes me laugh.