You must have Power to Stop Discrimination 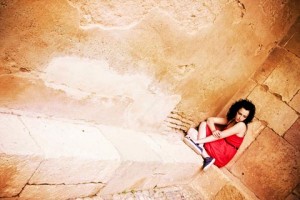 This is a piece on gender inequity and sexual discrimination (not sexual harassment, which is a different and emotionally more devastating thing). I´m writing this at this time not because of any one thing that´s happened, but because of a culmination of things. Sometimes it just seems like a topic is in the air, building momentum, and this topic has finally found a voice in me.

This post had three different triggers. The first was a bad moment I had last semester, when I found out a student in my Physics for Engineers class was making sexually harassing comments on a regular basis. The second trigger came from confronting numbers and statistics on women in physics and astronomy for a pair of talks at Dragon*Con. And the third trigger was this little gem posted by Rebecca Watson on Twitter under the heading “Sexual Assault Prevention Tips (A must-read! Pls RT and save someone from being raped)”

Discrimination, harassment, and rape all share one rather awful thing in common: They occur when one person or group is able to act in a hurtful way to another person or group without anyone stopping what´s going on. This does not have to be men against women: I´ve seen barns filled with middle-aged women swarm on the lone equestrian male, doing everything from landing the friendly slap on the ass, to cat calling him in his riding attire. It also doesn’t have to be purposely hurtful: I´ve watched as male grad students, at the beginning of the semester and before social groups have formed, thoughtlessly walk around asking all the other men if they want to head out [for lunch / to go to the gym /to get a drink] while they left the women behind. Sometimes people in power don´t even realize what´s going on as they do it, the sexual discrimination that happened to women at MIT is an example of this. Over years women weren’t given the same job advantages as men, and it was entirely without thought. When the problem was pointed out, measures were taken to fix the problem. (This study is mentioned in the forthcoming National Academies report, “Gender Differences at Critical Transitions in the Careers of Science, Engineering, and Mathematics Faculty.” )

And here is where I´m going to ask all of you to listen to me really closely: Anytime anyone with the power to help is aware of any form of discrimination and they do nothing to fix it, they are just as much to blame as the perpetrators.

Throughout my adult life I have over and over had some well-meaning man watch me get frustrated in some work situation or academic situation, and they´ve said with the intention of comforting me: “It’s not you, he´s an [expletive] to all women.” Okay, nice try. I appreciate the attempt, but – Could you maybe offer a girl a little help?

I want to be clear: If you are in a position of power, and you see a problem, telling the victim they are being victimized is not a solution. Finding a way to stop the perpetrator is the only a solution.

This is not a matter of men against women. This can be in either direction with gender. It can be racial. It can be religious in nature. And in academia it can even take the form of Large Prestigious University Researchers discriminating against small college researchers.

Let me return to those 3 triggers above as talking points.

Trigger 1: Male student making sexually harassing comments I have never been so angry in my life, and as the professor of the class I grabbed my syllabus, found the line that says, “Loud and disruptive students are not welcome. If you disturb your classmates, you will be kicked out!” and made it clear that I would wield that line of my syllabus if even one word of sexually loaded speech was uttered, and that the student – any student with harassing language – would not only be kicked out of my class for the rest of the semester and fail, but I´d report them to the dean of students.  Then I moved back onto discussing physics. The students behaved (all the way through the end of the semester in fact!), but at the end of class a tough as nails, takes no shit from anyone, women came up and commended me for what I had done, but then she said it´s all kind of useless as long as there are professors making sexually explicit jokes in single gender dominated classes. All I could do was say, I´m sorry, I can´t help you, that prof has tenure and I´m just someone living grant to grant. All I can say is you need to report it on your evaluations or go to a chair or dean. Every university has its 1 or more faculty member who say the wrong things, crossing the wrong lines, sometimes just to get a laugh. But as long as that 1 (or more) person exists, the problem exists.

And here, I have to be very careful what I say because I know this is a dangerous post to write. The people I work with now I may have to work with for the rest of my life – academia is a very small culture, and with our very limited resources, emotions run high and grudges are held for decades. But I want to say this nonetheless: We as a field need a better way for addressing these problems so junior faculty like me don’t have to tell students – “I’m sorry, I can’t help you” because I’m too afraid for my own job. I have known about problems at every institution I´ve been at and I haven´t felt comfortable reporting them because I know that if I reported every problem a student reports to me it would put my situation in jeopardy. We need a better way to report problems.

Right now, a student must report the problem to a person in power (all men in my areas of expertise – I don’t count as someone with power. If they report it to me, I can report it to the chair or dean, but then have to produce the student), and if it is another student victimizing them, they may have to confront that student face-to-face in the university judicial system. If it is a faculty member, it is likely half the university will know who reported what very rapidly (never trust an academic with a secret). We’re all told everything is in confidence, but we’ve also all had that one gossipy tenured senior person (often from another department) let us in on the past 10 years of sexual misdeeds. This means the accuser – the victim – will face extensive scrutiny and the potential of becoming the bunt of lunch time laughter (a form of additional harassment) while they wait and hope for the academic judicial system to help them out.

We need a better way to handle problems and keep people safe. I don’t know what the solution is. I wish I did. I just know we need something better.

Trigger 2: The depressing numbers Let´s face it, the situation is bleak. Go read the two reports I summarize here. These numbers tell me one simple thing: A lot of women are leaving science for a lot of undocumented reasons. People only go into things like physics and astronomy for 1 reason: Love. They love the field or they love the challenge. They weren´t seeking fame or fortune. Like the impoverished poet, they self-selected to bleed themselves into their work. Both men and women with into physics/astronomy out of love, but women have preferentially left behind the field or challenge for undocumented reasons. I know I personally left the field once out of frustration, and one element of that frustration was knowing I’d never be part of the old boys club (which I then learned also existed in other fields).

Trigger 3: The one certain way to prevent rape is to get rid of the rapers – The topic of this post isn´t rape, but the idea still applies. In the case of gender discrimination by men on women, I as a woman can do all I want to try and avoid harassment, but at the end of the day, I can be as cautious and uncontroversial as I want (or don’t want), but the choice to be discriminated against based on my gender isn´t a choice I get to make – it is a decision made by others. The only thing that can stop men from harassing women is for men to step forward and say enough is enough. (The same is true if you reverse the genders, or change this to a case of religious, race, or other discrimination.) Always, it must be other members of the group in power who step forward and stand up for the people being victimized. This was true during the civil rights movement, for instance.

And here is the challenge I want to put out there: If you are a man and ever feel the need to pull a woman aside and say “It´s not you, it´s because you´re a woman,” I want you to act on that need, and then I want you to report to the proper authorities what is going on. Be an advocate. Stand up for someone who may not be able to stand up for themselves. You have the power to change things.

And if anyone ever tells you, “It’s not you, they are like that to all [women / minorities / Christians / Jews / gays / etc],” look at that person and tell them, “If I fight this, I could lose my job and be labeled a trouble maker. If you report this, they’ll listen. Will you help? Will you report what you’ve witnessed to the appropriate authorities and prevent this from happening again? Will you help me?”

Be safe. Be good. And if you have power, help someone without it.