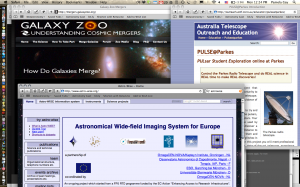 Real Science by Real People all from your keyboard

Here at dotAstronomy, each day of the conference is dedicated to a different topic: Citizen Science, Web-based Research, Visualization, and Outreach. Each topic is tangled with new media and web 2.0 technologies, and by the end of the week we hope to have made the web a little bit richer to explore.

Here on day 1, we’re starting in on what is perhaps the most overarching theme: Citizen Science. At its most fundamental level, citizen science is the act of every day people making contributions to science that produce a new understanding of the topic at hand: this is real research by real people. In astronomy, variable star observations are perhaps the oldest form of citizen science. For almost 100 years the American Association of Variable Star Observers (AAVSO) has worked to organize amateur astronomers to make scientifically needed measurements of everything variable, with targets varying from supernovae to eclipsing binary stars. Over the years, amateur astronomers have added to their target lists gravitational lenses, transits of exoplanets, and measurements of the flickering of active galaxies.

As amateur astronomers have taken on more and more advanced science topics, the needed equipment has grown from requiring just a pair of eyes to often (but not always!) needing a personal 16-inch telescope with a full suite of filters and digital detectors. While I am forever amazed by the personal observatories these leisure time astronomers have built (amateur is the wrong word – they have professional skills and equipment), I recognize that the digitization of astronomy data acquisition is making it harder and harder for everyday people to get involved – the cost barrier and space barrier are just too high. This is where the internet can provide solutions. For those who have an observational bent, the Global Rent-A-Scope (GRAS) provides a low cost option.

The internet also opens doors to new ways for people to contribute beyond observing. There are now a whole range of possible ways to participate, including (but not limited to) data mining and data analysis.

Here at dotastronomy, where some of us are better known by our usernames than our real-world faces, we’re focusing on these internet based ways of doing citizen science.

Our first talk of the day is by Gijs Verdoes (Kapteyn Institute), from the Astro-WISE project. This is what I would call a data mining facility, but that description is perhaps far too narrow. The Astro-WISE system provides its users ways to access both final (reduced) and raw images from a variety of sky surveys and then gives users a suite of data processing and collaboration tools. Astro-WISE also allows users to build workflows using their own or already existing algorithms that facilitates the testing of ideas that can then easily be tried and then broadly applied using recorded (and sharable!) scripts. This is a scalable system using grid computing. It is all built on python, and one of the really neat side comments coming out of this talk is that today astronomers seem to streaming away from classic data reduction languages, such as IDL, to adopt python as their data reduction language of choice. If you are interested in learning how more about Astro-WISE, I encourage you to go out and explore their guided tour.

From Astro-WISE, a project designed for professional (paid) astronomers that also facilities public astronomy, we’ve moved on to Rob Hollow and Pulse@Parkes, a project designed to get kids doing observing for/with professional scientists (@pulseatparkes on twitter). This very straightforward project that uses a few hours of telescope time on the Parkes radio telescope each month to take needed observations of pulsars where the telescope is remotely controlled by school children. Helping the kids are a variety of scientists and educators who are with them every step of the way, working both face to face with them in the remote control room and via skype from the observatory. One of the early concerns in this project was that kids would get lost in the Parkes control system, and it was suggested that perhaps a special kids control system would be needed. The thing is, kids are a lot smarter than people give them credit for. Today, the Pulse@Parkes program has the kids doing everything the pros do using the same software in the same way and this is one of the small things that make the kids most proud. While this program primarily works with Australian schools, there are American schools who have taken part. Are you a teacher? Do you want to see how to get involved? All the info you need to be a part of this can be found here.

From data mining and data acquisition (and via a coffee break), we’ve moved onto Galaxy Zoo. I know I’ve talked a lot about Galaxy Zoo here, but there are a few new things you should all go check out. Specifically, there is a new Zoo. Often referred to as “Merger Zoo” the officially named Galaxy Zoo: Understanding Cosmic Mergers project. Each day a new merger is sent out to the users and we ask everyone to try and help us model what is going on. Have you merged a galaxy today?

With the morning sessions wrapping up, we’re getting ready for an Unconference afternoon. I think I might just go learn python…