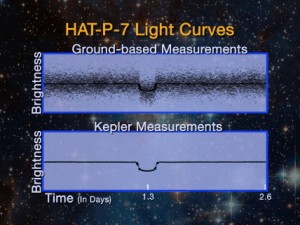 This is the morning of Kepler. I’m currently sitting in a the Marriot Ballroom watching the speaker, William J Borucki (NASA/Ames) gear up to announcing planets.

This amazing mission has been imaging the same rich stellar field over and over looking for planetary transits: the slight dimming of light from a star that comes from an orbiting planet passing between us and that distance star.

After 20 minutes of gearing up, he announced 5 new planets with orbital periods between 3.2 and 4.9 days orbiting stars larger than the sun at orbital distances 4.31 to 18.8 times the size of the Earth’s orbit. Because the stars are bigger than the Sun (by an amount not shown in the table), this is hard to quantify – they could be very near the stellar surfaces! – He referred to them as icy giants, but their surfaces are all hotter than 1500 Kelvin, with surfaces in 2 cases hotter than molten lead! These are large hot planets.

4 of these planets are all more massive than Jupiter, and one is smaller but still larger than Earth. There is a great table coming in a paper on Astro-PH going up later today (link to come)

In addition to these stars, they have also discovered several neat variable stars: binaries, oscillating stars, pulsating variables, and more. This is one of the great things about this mission: While it was designed to find earth-sized planets orbiting other stars (given more time – they require data over more time than Jupiter-sized planets), it also collects data on variable stars in the field that is of amazing quality. This means that Kepler’s throw away data is somebody else’s science.

Okay he just said something weird I’m going to have to look up. They have found small – Jupiter-ish sized in radius – that are hotter than the star they are orbiting. These look like tiny hot stars orbiting cooler stars BUT the hot object is too big to be a white dwarf and too hot to be anything else. He said there are more than one in the field and no one knows what they are.

The Kepler Press conference is coming up soon, and hopefully we’ll get more info there.