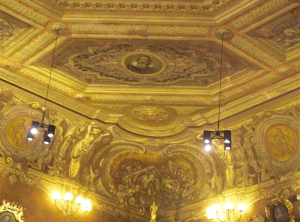 Galileo Painted on Ceiling of "Aula Magna of Palazzo Bo"

Sometimes it takes a bit longer than planned to get around to writing than expected. The second day of the IYA Closing ceremonies was filled with talks on history & vision – Who was Galileo and what was the real relationship between him and the Chrutch? How do we move forward to celebrate astronomy in years that aren’t 400 year anniversaries? How do we build on what we’ve done so that great new projects aren’t lost? And where does science go tomorrow?- Presented talks included talks from politicians, historians, and scientists.

Want to see what we saw? Full video coverage is available here.

In the past 400 years since Galileo turned a telescope toward the sky and reported what he was seeing, the technology has come a long ways. From hand ground lenses smaller than a palm that couldn’t quite resolve Saturns rings to 10 meter mirrors that allow us to see galaxies forming at the edge of the visible universe, we have not only grown our understanding, but we have also grown the universe.

Prior to Galileo and Kepler moving the Sun definitively to the center of solar system, the Earth-centered universe had been a tiny place, with all the stars hanging out where today we place the Kuiper-Belt. If we pretend they accurately knew distances back then (and they didn’t) the entire universe would have been ~ 0.0005 light years in diameter! Today we know the visible parts of the universe (which are probably less than 5% the size of the total universe!) are 93 billion light years in radius! That means the size of universe people learn in books (or on tablets), thanks to the telescope, has grown by a factor of a hundred-thousand billion! It’s not quite billions and billions, but still…

Along with growing the known size of the universe, the telescope has also populated the universe with objects that have forever been more fantastic than anything imagined in science fiction. From the discovery of galaxies, to black holes, to gamma ray bursts, at every turn and with every new technology the universe becomes more fantastic.

In someways, to me the most reusable legacy of the IYA is one simple phrase, “The Universe: Yours to discover.”

It is a true statement, and it is challenge. In the past couple years, thanks to citizen science, the world has seen comets discovered leaving their mark on Jupiter, new stars emerging from their home nebulae, and even entirely new classes of galaxies. Even today, in our world of giant telescopes and supercomputing, you – working from your sofa or your drive way – are capable of making tomorrow’s great new discovery.