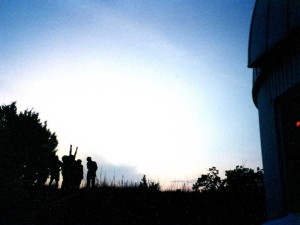 When I started graduate school, I was given the impression that astronomy consisted of two broad formats (observational and theoretical) and addressed a set of specific subtopics (planets, stars, intersteller media, galaxies/cosmology). In this paradigm, people who studied how people learn astronomy were off to the side somewhere. In broad brush strokes, this is a fairly fair image. While there is a rich and dynamic group of people working to both teach astronomy and communicate astronomy to the public, these people are generally side-lined, devalued, or just not seen as professional astronomers. Today, in South Africa, the “Communicating Astronomy to the Public” meeting is seeking to change this view by bringing a new level of professionalism to our new field, and by demonstrating that we have an impact on how the world sees the stars (and everything else in the sky).

Looking around the room, I see PhD astronomers, journalists, educators, amateur astronomers, and business managers, all involved in making people look up and learn. That we are all here – let to travel by our departments and funded through our grants and institutions – is a demonstration that times are changing and what we are doing is valued at some level.

When I was a graduate student, in the 6.5 years I was in Texas, two different astronomy education researchers come and give colloquium talks. On a third occasion, three of us in the department gave a talk. In all three instances, people came out of the woodwork (or at least up from the physics department) to heckle the speakers, making it clear they didn’t think statistical results from education research could be valid because they always knew some example that was an exception to the average. This was horrible logic. According to their logic, I can say that the average 1st grader (6 year old) can’t do algebra based on research, but because I know one first graders who can do algebra, all my research is invalid. This is horrible logic! But, when your goal is to invalidate someone, logic doesn’t have to be good, it just has to be good enough to caste doubt in an audience. And that’s what these people wanted to do – discredit and side line astronomy education research (heck, even Sagan was mocked for spending time communication astronomy).

This sidelining of education and communication conveys a horrible message: It tells young scientists with a passion and an ability to communicate and/or teach that they are wasting their time when they do anything other than research on astronomical objects. I’ve heard it said, those who can’t do research teach.

The only way I know to change this attitude is to raise the professionalism of our field. We need to demonstrate that communicating astronomy online isn’t just playing online. We need to demonstrate that teaching based on educational theory and prepared interactive class plans actually has a better impact than the traditional lecture from notes (I remember being told to keep all my college notes because they would form the core of my future lecture teaching notes). At the end of the day, we as a field of astronomy educators and communicators have to demonstrate that what we learn from our work matters and that we are changing lives.

This is what I do. When I first started podcasting back in 2005, I dealt with a lot of “Your wasting your time” comments. And I heard a lot of “Having fun playing online?” comments. Since then, I’ve been working one paper at a time to show that while yes, I am playing online, what I’m doing matters. And I’m just one of many people working to do this. In recent years, two new journals, the Astronomy Education Review journal, and the Communicating Astronomy to the Public journal, have been created for the group of us working to demonstrate the results of our work. Yes, I’m a trained variable star astronomer and galaxy researcher (and I’ve promised myself to publish papers on each this year to clean out my data backload). But while I’m a astronomy object researcher, I’m also working to become an astronomy communications researcher.

As the population of us doing this work has been growing and gaining momentum, we’ve been taking on larger and larger projects, from becoming the voices for space missions (or twitter feeds), to recruiting and training citizen scientists, to all the things in Caroline Odman’s talk (which will go online soon and get linked to here), we are doing more and studying the impact of everything we do as we go.

In someways, the International Year of Astronomy was our two new fields’ opportunity to shine. We were given a chance to go out and play with the entire planet and make a difference, and this week we are reporting back about our successes, and we are planning how to make the best of what we’ve done last beyond 2010.

I have to admit, I have been too jet lagged to keep up with the numbers and graphs that have gone flying past. All the talks from this meeting will go online (including my jet lagged talk). Rather then do a poor job summarizing things here, I’d encourage you to look at the twitter messages under hash tag #CAP2010 and watch for the results to be posted. Read the journals. Get things first hand.

I know a lot of science communicators – journalists, amateur observers, spacetweeps, teachers, and others – read this blog. You too are part of changing this field. The journals I named above to not require a PhD to publish results. As we build our new field, I would challenge all of you to evaluate what you do, track outcomes, learn what triggers people going from passively paying attention to astronomy that randomly appears in front of them (go go guerrilla sidewalk astronomers) to actively seeking astronomy content (and maybe even becoming sidewalk astronomers themselves).

Be part of the dialogue. Together, we are astronomers.