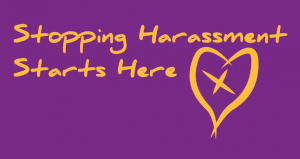 Over the weekend I gave a talk at TAM2012 that discussed as one part of the talk the issues of harassment and discrimination that minority groups to often face.

In order to call attention this issue I had printed (with personal funds) a set of t-shirts that simply say, “Stopping Harassment Starts Here.” The shirts are in purple, a color used to symbolize the need to stop domestic violence, stop animal cruelty, support religious (and non-religious) tolerance, and stop bullying of members of the LGBTQ community. These are all issues that matter to me, and I hope that at least some of them matter to you.

I’m now offering them here on starstryder. All proceeds from sale of the shirts will go to the AAUW Legal Advocacy fund, which pays for legal fees for women dealing with discrimination in education and the workplace. If you could please buy a shirt (or shirts), I and the women the AAUW helps support would be very grateful.

This talk build on a post from a while ago, in which I wrote:

Discrimination, harassment, and rape all share one rather awful thing in common: They occur when one person or group is able to act in a hurtful way to another person or group without anyone stopping what´s going on. This does not have to be men against women: I´ve seen barns filled with middle-aged women swarm on the lone equestrian male, doing everything from landing the friendly slap on the ass, to cat calling him in his riding attire. It also doesn’t have to be purposely hurtful: I´ve watched as male grad students, at the beginning of the semester and before social groups have formed, thoughtlessly walk around asking all the other men if they want to head out [for lunch / to go to the gym /to get a drink] while they left the women behind. Sometimes people in power don´t even realize what´s going on as they do it, the sexual discrimination that happened to women at MIT is an example of this. Over years women weren’t given the same job advantages as men, and it was entirely without thought. When the problem was pointed out, measures were taken to fix the problem. (This study is mentioned in the forthcoming National Academies report, “Gender Differences at Critical Transitions in the Careers of Science, Engineering, and Mathematics Faculty.” )

And here is where I´m going to ask all of you to listen to me really closely: Anytime anyone with the power to help is aware of any form of discrimination and they do nothing to fix it, they are just as much to blame as the perpetrators.

Throughout my adult life I have over and over had some well-meaning man watch me get frustrated in some work situation or academic situation, and they´ve said with the intention of comforting me: “It’s not you, he´s an [expletive] to all women.” Okay, nice try. I appreciate the attempt, but – Could you maybe offer a girl a little help?

I want to be clear: If you are in a position of power, and you see a problem, telling the victim they are being victimized is not a solution. Finding a way to stop the perpetrator is the only a solution.

Will you be someone who says “Stopping Harassment Starts Here”?